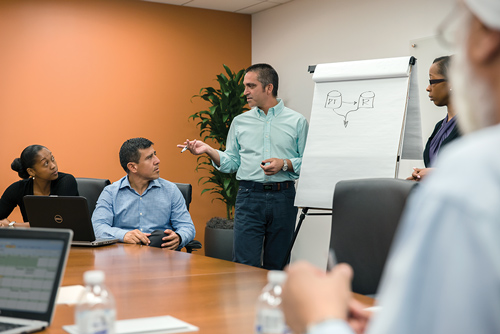 Supply chain executives must rely on all kinds of people and things in order to integrate their non-acute members into the health system‘s supply chain. Data is essential. Formularies too. A reliable medical-surgical distributor is a must.

But beneath it all, supply chain executives must rely on themselves.

“My focus was to cultivate relationships with our 12 physician groups and to align their purchasing habits with those of the system,” said Adams. He brought valuable experience with him, having managed the non-acute distribution portfolio for Novation (now Vizient) from 2013 to 2015, and having worked closely with Vizient’s non-acute arm, Provista, to drive value for its non-acute members.

“Unlike acute care settings, with their purchasing or strategic sourcing departments, in non-acutes, office managers or clinicians are often responsible for purchasing,” he says. “They know a lot about products, but less about purchasing, pricing or distribution. “AdventHealth felt it was important to standardize our purchases to our preferred contract suppliers in order to maximize savings.”

He started where he had to – building trust among people and departments who barely knew him.

“It was important to cultivate relationships with each physician group, because as their liaison to corporate, I needed them to get to know me and understand my role,” he says. “I am their support system and give them a voice at the corporate supply chain level.”

He set up weekly meetings with the physicians in central Florida, which comprise about 40 percent of AdventHealth’s physicians. During these visits, he learned about issues the groups were experiencing from a product or supplier standpoint. More important, “any time you have face-to-face interaction and actually learn about their business, you gain credibility in the room,” he says.

Having laid that groundwork, Adams prepared for the hard task ahead – slimming down the 8,000-plus SKUs that were being purchased by the twelve physician groups into a workable formulary. In addition to his non-acute experience, he enjoyed two advantages that other supply chain executives often lack. The first was the recent IDN-wide implementation of Oracle PeopleSoft.

“The PeopleSoft implementation was critical,” says Adams. It helped with information gathering, and it gave the physician groups easy access to the formulary, once it had been created. “By clicking on the link, requestors had instant access to the AdventHealth preferred products in one centralized location.”

The second advantage was AdventHealth’s longstanding relationship with McKesson Medical-Surgical.

The health system and its distributor had discussed the need for a non-acute formulary many times prior to Adams’ arrival, said Francis D’Avanza, vice president, strategic accounts, McKesson Medical-Surgical. “They knew they needed to get there, but they were waiting for the PeopleSoft implementation. After they hired Darrick, and with the PeopleSoft implementation in place, the light went on. It was ‘go’ time.”

To proceed, D’Avanza suggested a strategy that McKesson and its customers had found successful in the past – a “war room” event.

“The idea is to bring key people – clinical and supply chain – into one place for several days, and just start working on it,” he said. The McKesson team is on hand as well, providing data about product usage, brands and pricing. “It takes time, and you’ll have your tug-of-wars. But the results are worth it.”

“The war room was Francis’s idea,” said Adams. “For us to be able to get this done and get it done quickly, we needed McKesson’s support and effort. We couldn’t have done it without them.” The time and dates were set: The war room would take place on AdventHealth’s campus from Monday morning, April 22, 2019, to Wednesday afternoon, April 24.

“Since July, 87% of products purchased and 89% of spend is from the new standardized formulary. This puts us on track to reach our goal of 90% compliance within the first six months.”*

Setting up a formulary isn’t easy. Maintaining it – and preventing product “creep” – may be even more difficult. Here are a few ways Adams and the AdventHealth team plan to manage formulary in the months ahead:

“Absolutely critical to the success of a war room is participation by key clinical players throughout the system,” said Adams. “You want those in charge of patient care to be a part of decisions that ultimately affect patients. Their opinions were critical to the decisions that were made over those three days. “I framed the invitations by telling them, ‘This is your opportunity to have a voice.’ The promise of that dialogue was what made them want to be a part of what we were doing.”

During the weeks leading up to the war room, the McKesson team compiled and categorized data, including pricing by unit of measure, as directed by Adams. As displaying physical product samples was not to be part of the proceedings, AdventHealth would use its audiovisual system to display photos, descriptions and product numbers (for comparison of like products) from the McKesson catalog.

Adams and his team decided that participants at the war room would tackle relatively “easy” product categories – that is, those with the fewest number of SKUs – first. Gloves was one of them. In addition, the team categorized products as “preferred” if they were on contract.

“One of the key things that McKesson provided for the war room was the presence of Dalisay Watkins, strategic account manager, for all three days,” said Adams. “She recorded every single decision that was made in that room, and after it was over, compiled all that data in an easy-to-read format, so I could present it to the participants.”

Decisions for many categories were reached fairly quickly, he added. “Our successes, including reductions in pricing and SKUs, were eye-opening to all, and in some ways, helped energize the proceedings. There emerged kind of a competition to see how many reductions we could make.”

By Wednesday afternoon, the group had winnowed its non-acute formulary from 8,000-plus SKUs to just about 2,500.

Following the war room, Adams embarked on a “road show” to reinforce the decisions made in the war room and to gauge the 12 physician practices’ reactions to the formulary. He found that the groups were happy about the decision to standardize, and grateful for the opportunity to participate in the process. In fact, some asked for a monthly report of those requestors who were out of compliance.

“Since July, 87% of products purchased and 89% of spend is from the new standardized formulary,” said Adams. “This puts us on track to reach our goal of 90% compliance within the first six months.”*

“I am still amazed that we were able to reduce our non-acute formulary by 66% over the course of three days. It demonstrates the power of collaboration.”

Thinking of organizing your own “war room”?

Do you want to stage your own “war room” to hammer out a non-acute product formulary? Francis D’Avanza, vice president, strategic accounts, McKesson Medical-Surgical, has helped health systems do just that. Here are some of his suggestions.

*Per internal data by McKesson.