As healthcare providers, you know that the risk of healthcare violence is real. OSHA guidelines state that if an employer recognizes and identifies an unsafe condition in the workplace that puts an employee at risk for illness or injury, then that employer is obligated to put the appropriate safeguards in place to minimize the risk.1

Typically, people do not go directly from a state of calm to a state of being physically violent. According to Wilder, there are six behavioral changes that a person goes through that lead up to physical violence (known as the “Aggression Continuum”). The six steps, similar to climbing a ladder, range from calm (the bottom rung) up to physically violent (the top rung). “The goal is always to get the person back down to a state of calm,” says Wilder.

Most everyone you have contact with is going to be in a state of calm. This could be a co-worker at the nurses’ station, a supervisor-subordinate relationship, or a patient or resident. The person states his/her concerns in a calm, polite, and non-agitated way. This person’s presence is not threatening to you. Your presence is not threatening to them.

Verbally hostile equals verbally agitated plus the element of emotion. The person’s behavior is very similar to when they are verbally agitated, but they’re now at a point where they’re oblivious to any efforts to calm them down. Their anger is still generalized and non-directed. They may start to use generalized statements, “This blankety-blank place, you blankety-blank people,” “This always happens,” or “You never let me.” 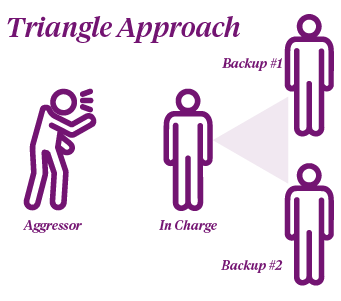 When a person is verbally threatening, they begin to focus their anger on a specific person. It can be directed at you or it can be directed at a different person. This is called “directed anger.” They may call you by name or use the word “you”, or they may point to you. They may make a demand for action and then make a threat of what’s going to happen if you don’t do it.

There are recognizable physical signs that indicate when a person is becoming physically threatening. They get into an aggressive stance, or they start looking around for potential weapons, which can include common, everyday items such as a letter opener, pens, stapler, telephone or a scalding hot cup of coffee.

The last step on the ladder is when the person becomes physically violent. They physically attack you or another person.

Self defense vs. patient control

Self defense involves any and all means of self protection.

OSHA guideline 3148, subtitled “The Guideline for the Prevention of Workplace Violence for Healthcare and Social Service Workers,” sets forth guidelines for putting in place workplace violence prevention programs in healthcare facilities.